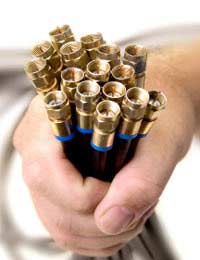 So what does the digital switchover mean, what's it all about and what does it mean for television watchers in the United Kingdom?

The first thing to point out that the switchover to digital television is nothing to do with the High Definition (HD) services and televisions that are coming out at the moment.

These are two major but different changes in the way television is going to be delivered to our homes. HD is all about showing higher quality pictures and the digital switchover is about transmitting the television signal to your house in a different way to the current method, which is known as analogue. So forget about HD television for the rest of this article.

Why is the Digital Switchover Happening?

There are two main reasons for the digital switchover and, in the end, they both come down to making money. The first is that digital television, which can be received through a traditional style aerial but also includes satellite, cable and broadband television services, allows many more channels and services than the current five or six channels that can be transmitted through the current analogue (aerial only) service.

This means that broadcasters can show more programmes and make more money. Digitally transmitted television also makes it easier to do things like storing and recording programmes, pausing and rewinding them. The interactive services that people have been seeing over the last few years (usually activated by the red button) also need digital transmission, as do the electronic program guides (menu systems) that are used on satellite, cable and freeview services.

Although we said at the beginning to forget about HD for the rest of this article, it is true that HD would be very hard to do over analogue transmission because it requires more information to be sent to the television. So the digital switchover is necessary for us to receive HD television and other innovations that are on the way such as 3D television.

Second Reason for the Digital Switchover

The second reason for the government pushing the digital switchover is more mundane. Once it is complete and the whole of the UK has been covered, the analogue signal will be switched off. Some of the wireless spectrum taken up by the current analogue transmission service can then be sold off by the government for various other broadcast services.

What Does it all Mean for the Householder?

Inevitably what this means for the ordinary householders is that they will have to spend money if they still want to receive television services. Older television sets and video recorders will need adapters to allow them to receive the new style digital signal and most homes will require new high-gain aerials. The alternative is to subscribe to a satellite, cable or broadband television service, depending on what is available in each local area.

The digital switchover is being staged across the United Kingdom with each television region switching over separately. The roll-out dates can be found on the government's various websites covering the digital switchover and on the websites of most of the broadcasters, but at the moment it is scheduled to be complete by 2012.

There are other articles in this section that go into more detail to help people decide what to do to make sure they're ready for the digital switchover when it happens in their area.